I've always been concerned about my rental properties having multiple, large expenses all in the same month.  But thankfully this hasn't really happened.....until now.

This huge number, as you can imagine, wiped out my cash flow.

When I first started Passive Income Dude, my first report for the month of April, which occurred last year in 2017 was the first month ever where my properties in sum produced negative cash flow. Believe it or not, I only had two active rental properties last year (in April), and my cash flow for that month was -$11.74.

Well apparently April is a bad month for me because this year's total was nearly similar!

The "good news" of this month's report, however, is that despite taking a giant $960.88 assault on my cash, I still came out positive for the month...barely.  See below for the details: 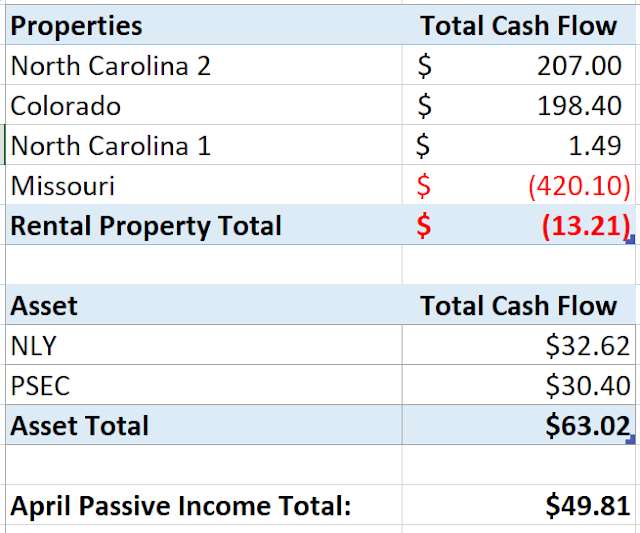 Wow. Thankfully I was able to eek out a slightly positive total for the month; barely!

Though it may look like several of my properties did well, and that it was just the Missouri property that was bad, that isn't actually the case.  Here is a detailed list of the expenses for this month below:

As you can see, THREE properties had repairs at $100 or more this month. When it rains, it pours!  But, another sliver of good news - these three properties all have property managers, so the work I actually had to do to complete these repairs was about less than 1 hour for the whole month.  Sometimes it is nice paying for this service, and this month is an example of that.  Very little work required by me, despite a lot of activity and attention needed.  Still, it was not fun to see $960 wiped out from your monthly cash flow.

Purchases
This month had another bit of a silver-lining because I continued to contribute to the mutual funds in my portfolio and have now maxed out my ROTH IRA for the year and am only several thousand away from maxing my wife's ROTH IRA as well.  This means I completed GOAL #5 for the year, which is great!  Diligent, steady, disciplined investing over time into low-cost mutual funds seems to be the way to true financial security and true wealth!

Thoughts on This Month
This was a terrible month for Passive Income, but I am thankful for the fact that I apparently can have such large expenses, all in one month, and still only be -$13 in cash flow for my rental properties. And then also that I can have a pretty quiet Asset month, with only two payers, and have my overall total passive income slightly positive. I know month's like this are going to happen occasionally, but it is nice to know that I have a system that is now fully able to absorb this large amount of maintenance and repair risk within my properties, without "busting the bank."

Compared to last year's April total in 2017 of $655, my YoY growth for this month was NEGATIVE 92%. That's ok.  If there were no repair costs, my YOY would have been significantly positive, which suggests I am moving in the right direction, despite this major setback.

With the addition of this month's income to my Progress Tab I now have earned $3555 in total this year in passive income.  Little behind my desired pace, but I'm motivated to keep moving forward!...No matter how small the monthly total!.

Thanks for reading as always. I greatly appreciate your comments and will do my best to always respond. Stay the course!