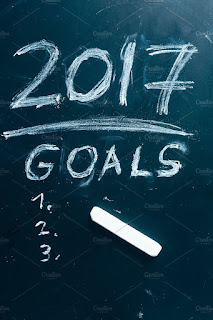 That said, I think it is important to have goals (as many of us bloggers do!) for all areas of our lives, and I talk a little bit more about the importance of goals on my Passive Income Goals page.  At that page you can also find my 2016 goal, as well as some of my future projected goals (2018, 2019, 2026....next two years and when I turn 40.)

One thing I personally like to do with my goals is prioritize them, by number.  So if there is only one goal I can accomplish, it should be the one at the top of the list, and then the #2, and so on. This indicates specifically where I should focus MOST, and what I want to achieve the MOST (to consider it a 'success', etc).

Finally, you'll note that the subtitle of my blog now says I am 31 years old. Another year down, another year older!  We only have one life to live so let's make it the best. Without further adieu, here are my financial goals for 2017. Some of them are pretty bold:

This is by far my most important goal.  My primary financial focus is to create enough passive income, as quickly as possible, to achieve my mission/vision.  I believe passive income unlocks financial freedom, which then opens many doors to other opportunities.

But frankly, $13,000 in passive income this year is going to be difficult to achieve.  Last year my goal was $10,000, which I did not achieve. So with last year's epic failure, you may be wondering how I think I can achieve a passive income goal that is 50% higher than what I earned last year. To be honest, I think I actually can achieve this goal, and that my success (or failure) will come because of three reasons:

1) My North Carolina rental property will be active.  This won't happen until the middle of the year, but a large part of success for this goal will come from this particular investment performing well. If I had to give a "percent responsible for success," I'd say as high as 65%.

2) My debt load will be much lower than it was last year.  Last year I was around ~$40,000 in debt....(non-mortgage debt, to be specific).  Clearly, it is hard to increase passive income while reducing debt. Last year's focus was debt reduction; this year's focus is passive income growth.  The "percent responsible for success:" I'd say 25%.

3) Passive Income Dude (PID).  Passive Income Dude was launched in the middle of the year (July) last year. It's hard for me to say that I wasn't as focused/diligent as I was before I had this site, but if I'm honest I know that it has helped me a lot, and to be even more attentive with my finances. So THANK YOU to all of you who read my site for keeping me accountable and motivating and supporting me. The "percent responsible for goal success:" I'd say 5%. It'd be wrong to attribute my website to more than that I think! (at least in this stage of it's growth).  So that leaves 10% remaining:  I'll leave this last 10% responsible for success to all other factors: dividend growth, dividend cuts, fund yields, etc.

This is my second most important goal. Up to this point since the start of PID, I've had balances (at it's high point) of around ~$10,000 in credit card debt. Thankfully it has all been at 0% interest thus far. But once that 0% runs out towards the end of this year and resets to around 20%, I will BE DESTROYED by interest fees if it isn't paid off.

This goal is similar to the one above - finish paying off all debt.  I have $5,000 left, owed to my father in law, and so I'm excited to get this one complete.  We've been diligently paying him back (at a starting point of $20k) since early last year.  If you're wondering why I went into all of this debt, see this article that explains it in depth, here.  I would do it again, and I still think it was a good decision.

I really think wealth creation, at its absolute core, comes down to a simple question: is your income more than your expenses, and if so what are you doing with the difference?  Having a positive savings rate (>0%) answers the first part of the question (...yes), and having a high savings rate (...greater than say, 15%) gets you to wealth quicker.  I think 28% will be hard for my family, but I believe that it is an achievable number with some discipline and concentrated diligence.  Since the creation of PID, I have averaged around 25% saved per month. We had one month last year at over 50%, which skews last year's overall average too high probably. Bottom line, 28% is going to be a challenge.

This goal may seem odd at first, but a high credit score is essential to getting good financing on rental properties in the United States.  The reason for this goal is that I may be looking at another rental property purchase towards the end of this year (though I haven't made this a specific goal for 2017 - see 2018!), and so this particular goal is laying the groundwork for the possibility of speeding up another purchase.

This is a very self-explanatory goal. Ultimately, I want to maximize my tax-efficient investments and then complete those investments first.

Retirement planning is critical to financial success, and Roth IRAs are a great way to be tax efficient and prepare your finances for when your human capital and labor income are non-existent. This is also a goal I've had each year for over 10 years now, and I don't want the 'streak' to end.

No additional comments!  We're a team.

In 2015 we were contributing to our kids' college 529 plan, and we stopped in 2016 to tackle debt.  I'd like to start contributing again, albeit slowly, as this is definitely not my financial focus. Hence it is a small number and comes in at #8, but still makes my goals list.

Well I think that is it.  I love hearing about other's goals and their perspective or thoughts on my goals.  Would you mind commenting below?  Thanks!

Email ThisBlogThis!Share to TwitterShare to FacebookShare to Pinterest
Labels: 2017, Goals

New comments are not allowed.