It is time again for my Monthly Progress Review, the last of the year, and a PERSONAL RECORD!

This monthly report covers December 2016.
I hope you enjoy these posts and that we can learn how to grow our passive income streams and build real long-term wealth together!
I am happy to report that December saw the highest Passive Income amount I've ever achieved in a single month, which I'll analyze in depth in this report.

Read More to see how I earned $2,658 this month in passive income,
Dividends Received
In total, I received dividends from five companies and five funds and two special dividends this month:

I also received a dividend from USAA as they do each year for all of their members, and finally, every year my annual Costco Rebate check comes in December as well. I include this 'special dividend from Costco' in this report for two reasons: It really is 100% passive, as I do not have to do anything at all to earn it except get my groceries like I normally would anyway, and two, it is in fact substantial enough (always in the hundreds of dollars) to include in my roll-up of passive income investments for the month.  Though it isn't from a fund or stock per se, it still is a dividend.

Anyway, listed below are the details for each: 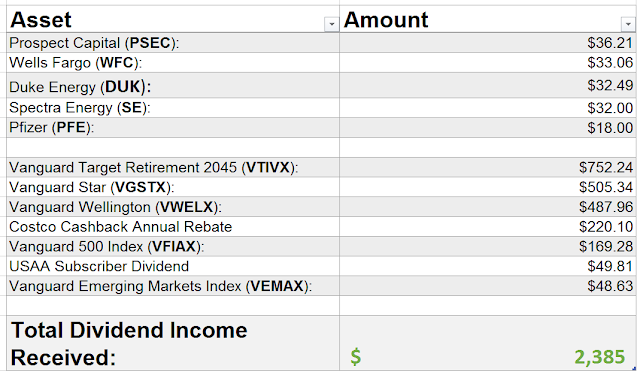 Rental Income Received
I currently have two rental properties, my Missouri Rental and my Colorado Rental.  Listed below is the cash flow they provided this month:

Purchases
No new purchases. Agh!  Next month.  It has been four months since my last purchase (Wells Fargo).

Thoughts on This Month
This was an incredible month for passive income, a personal record for me, which is always very exciting to achieve.  And as you can see above, this record still occurred with about $120 less from my rental properties (thanks to another repair at my Missouri Property, which made my cash flow for that investment negative $61 for the month), which lowered what I was expecting to receive.

As awesome as it is to receive over two thousand six hundred dollars in one month while not doing anything for it, I'd encourage those reading this post to realize the following:

1) My portfolio definitely was not built over night - I've been diligently saving and working very hard since I was 18 years old.

2) Despite this large amount, I've still got a long way to go to truly achieve FI.

But, I hope this is encouraging to you.  I hope you read this post and follow my journey and clearly see that YOU CAN DO THIS TOO. Simply working hard, and saving, and being very disciplined, and sticking to a plan over many years (as other bloggers demonstrate as well) really can produce sizable wealth.  That's awesome news and encourages me to keep going.

Finally, I almost did not post this comment, but there is a part of me that is slightly disappointed with this number, believe it or not, and I think I have a good reason why, so please let me briefly explain.  For the past four Decembers, I'd been averaging passive income growth of around 30%.  I know that 30% isn't sustainable for a long period of time, but 30% has been my actual average for the last four years. So, in making my $10,000 passive income goal for this year, I thought I could at least get around a 20% growth rate from last December's total. Since I'd reinvested all dividends and had also added new capital throughout the year as well, getting 20% growth seemed manageable.

So what happened? Well, I honestly don't know, but what I think happened was that many of my funds which contain bonds, that have been paying out awesome amounts of income in December for the last four years, finally got really hurt this year and therefore did not pay out nearly as much. This is my theory at least, and with mutual funds I don't think it is possible to forecast exactly what their yield (or income) will be.  So, I do my best to guess based on last year's numbers, but unfortunately this year was a very bad year for bonds (which as you know pay out a large amount of return in income).  Does this seem right, or does anyone else have a theory?

All of that said, I think I'll need to readjust my income growth rate going forward, as bonds I think will continue to have a hard road ahead, especially compared to the last several years. Be on the lookout because in several days I will post my 2017 goals.

Well, here is how the year turned out, month by month:

With the addition of this month's income to my Progress Tab I now have earned $8,841 this year in passive income.

Thanks for reading, and I always appreciate any comments,